The best places to watch F1 at Silverstone

If you’re looking for some inspiration on where to sit at Silverstone, then you’ve come to the right place! The guide below aims to be as helpful as possible in advising you to pick a grandstand to watch the next British Grand Prix from.

We’ve taken into account the best place for overtaking, likely place for spins and crashes, the best atmosphere and proximity to the facilities. It’s all covered and we’ve ranked it in order from our years of experience and personal opinions.

We’ve being recommending the following ticket resellers for over 10 years now. They all provide secure online payments, multi currency and a choice of general admission, grandstand seating and hospitality packages.

The last few turns and potential view of the podium 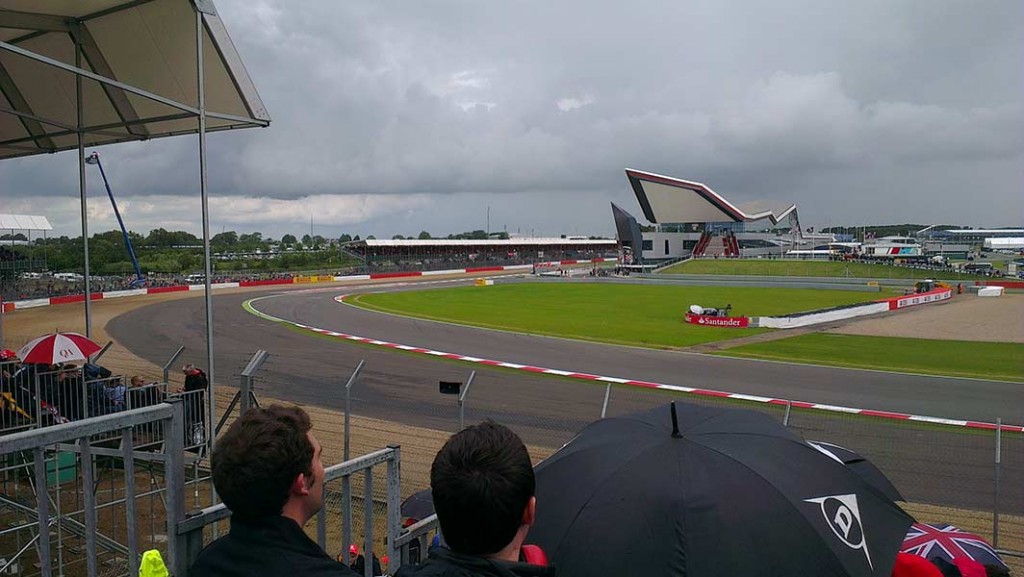 Club Corner has always been one of the best places to sit on the Silverstone circuit for years. In the current circuit configuration, it is the last corner before the start/finish line. Club was re-profiled for the 2010 race. Instead of constant curve after Vale, leading onto the straight, it became a double apex corner which proved an interesting challenge of the F1 drivers. The second apex is much tighter than the first. It’s partially blind and has the new pit wall on the inside. Accuracy is required and a clean exit essential to carry as much speed as possible across the start/finish line…

Loud and lots of activity in the pit lane

The International Pit Straight is an area of the Silverstone circuit that is seeing constant development year after year. This area is absolutely buzzing since the circuit revamp, and tickets always sell out months before the race. The new Pit and Paddock complex has been built between Club Corner and Abbey and signifies the climax of Silverstone’s massive development programme to turn the circuit into a world class racing venue. Grandstands have been installed along the majority of the length of the pit straight, in a place where previously only a few general admission fans may watch the race from…

Wickedly fast section of the track

From the Becketts and Club Silverstone grandstand, you are able to see each F1 car for about 10 seconds as they sweep through Maggots and then into Becketts and then onto the Hanger Straight. The aerodynamics on the Formula 1 cars are working at full capacity as they turn from left to right and then again, left to right in the space of a few seconds at immense speed. The series of turns at Becketts do not offer much in the way overtaking as the speeds are too high. However, a lot of lap time can be won or lost by the drivers who liken this section to threading the eye of a needle. It’s about precision and definitely about bravery!

Just a dab of brakes into a very fast right hander

Stowe corner is one of the fastest on the Silverstone circuit. The drivers arrive at 300 km/h from the Hanger straight, tap the brakes and launch in towards the apex in 4th gear. There are three grandstands to choose on this corner: Stowe A, Stowe B and Stowe C. Because of the size of the run off area at Stowe, the grandstands are set quite far back from the circuit. So the perspective of F1 speed isn’t great but you do get a huge viewing angle allowing you to see a lot of the circuit. Stowe A and Stowe B ticket holders get to see the cars drive the length of the Hanger straight, negotiate Stowe and then drop down the hill of Vale and onto club…

Turn 1 and a very fast couple of corners

Abbey has now earned the title of turn 1 thanks to the introduction of the new circuit layout and location of the pits and paddock for 2011. Formerly a tight chicane, Abbey is now an immensely fast right hand corner that is approached at 300km/h and leads onto the new circuit loop, first introduced for the 2010 British Grand Prix. Criticised for the huge bump at the turn in point, the corner split the F1 drivers opinions with some believing it to ruin what would be a good corner, and others citing that it only added to the challenge. Watching the cars from the outside, it is very noticeable…

Slow corner but a fan favourite

Luffield Corner use to be the last major turn at Silverstone, but with the circuit alterations a couple of years ago, it’s actually become a mid lap bend. In some ways it’s a frustrating corner for F1 drivers as it is low speed and is all about a clean exit onto the >National Pit Straight. Without traction control, drivers have to play with the throttle and not be too eager otherwise the back of the car will start to slide out. Throughout the practice sessions and even sometimes during the race, you often see drivers running wide out of Luffield and bumping across the turf on the outside of the corner. This compromises their lap times significantly.

Flat out sweeping curve onto the old pit straight

Many seats at Woodcote will offer a brilliant view of the Wellington Straight (Woodcote A) and all the action taking place along there. This is where the DRS zone is placed meaning numerous overtaking moves made into Brooklands corner which is right in front of you. The large TV screens above the old pit lane also aid you in keeping tracking of events around the rest of the Silverstone circuit. The F1 Village used to be located behind Woodcote, but is now located on the track itself on the now disused Bridge corner.

Feel the brutal force of an F1 car working hard

Copse corner use to be the first turn on the Silverstone circuit, but is now turn 9 after the circuit was updated a couple of years ago and the pit complex was moved. The corner is potentially flat out in Formula 1, depending on fuel loads, the drivers can often just stay in seventh gear and keep the throttle planted to the floor around the sweeping right hander. Watching from Copse corner is awesome because you get to see how well the down force works on the modern Formula 1 car. They seem absolutely glued to the track as the aerodynamics push the car into the ground. The turn in speed can be over 280 km/h and is mind blowing to watch! You often see drivers running incredibly wide through this turn as they find the absolute limit of grip.

Where they use to start and finish the race

The National Pit Straight is the half way point of a lap of Silvestone, with the start and end being situated over on the International Pit Straight. Although the atmosphere is still fantastic in the numerous grandstands that line the circuit in this area, the buzz of looking over into an active pit lane has been lost with the circuit modifications made over the last few years. During the race you will see the cars screaming past you at incredible speeds before they sweep into Copse corner. This means that sitting on the pit straight is very loud as the cars are always at full throttle. Don’t expect to be able to chat to your friends without shouting if sitting here!

George Beech: Maggots and Becketts is a great spot to see how fast F1 cars can change direction, Stowe is not bad as you get to see them down the Hanger Straight and into Vale and Club.  Copse, Abbey and Woodcote also great spots and you cant forget the International Pit Straight! all in all Silverstone is just an awesome track to be at during a Grand Prix. The atmosphere and all the fans is just brilliant. I’ll see you all there next year at the home of British Motorsport!!!

By: James Wilson Part Of: Your guide to the British Formula 1 Grand Prix 209 Comments