Stowe corner is one of the fastest on the Silverstone circuit. The drivers arrive at 300 km/h from the Hanger straight, tap the brakes and launch in towards the apex in 4th gear. There are three grandstands to choose on this corner: Stowe A, Stowe B and Stowe C.

Because of the size of the run off area at Stowe, the grandstands are set quite far back from the circuit. So the perspective of F1 speed isn’t great but you do get a huge viewing angle allowing you to see a lot of the circuit. 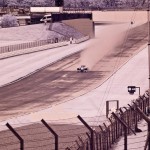 Stowe gives a great view down the Hanger Straight. 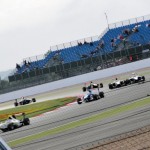 The exit of Stowe leads to Vale and Club Corner.

Stowe A and Stowe B ticket holders get to see the cars drive the length of the Hanger straight, negotiate Stowe and then drop down the hill of Vale and onto club.

From Stowe C, you aren’t guaranteed to see down the Hanger straight as it depends how far along the row you are so bear it in mind!

Stowe corner is one of the best over taking opportunities on the whole circuit as the track is wide and the cars can slip stream on the straight. With 24 cars heading into Stowe on the first lap of the race there’s always the chance of thrills and spills.

John Duffy: Full speed heading toward you. Some guaranteed overtaking coming down hangar straight, and you can still see pretty much down to Vale.

By: James Wilson Part Of: The best places to watch F1 at Silverstone 1 Comment