Turn 7 – Keep it neat & tidy and early on the power

Luffield Corner use to be the last major turn at Silverstone, but with the circuit alterations a couple of years ago, it’s actually become a mid lap bend. In some ways it’s a frustrating corner for F1 drivers as it is low speed and is all about a clean exit onto the National Pit Straight.

Without traction control, drivers have to play with the throttle and not be too eager otherwise the back of the car will start to slide out. Throughout the practice sessions and even sometimes during the race, you often see drivers running wide out of Luffield and bumping across the turf on the outside of the corner. This compromises their lap times significantly. 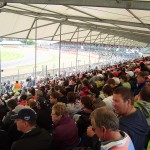 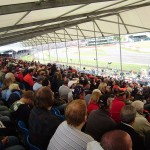 Grandstand view down the National Straight. 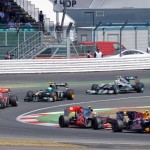 You can see Brooklands corner from Luffield. 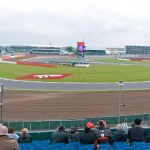 Luffield ticket holders get to see the cars arriving down the Wellington Straight into the heavy braking zone for Brooklands Corner. There have been some key overtakes here since new layout of the circuit was introduced, as well as some thrills and spills. In 2012, Sergio Perez and Pastor Maldonado crashed whilst battling for position, and Mark Webber took the lead from Fernando Alonso in the closing stages of the race.

The atmosphere around Luffield is quite simply immense. The mix of high grandstands and packed general admission areas below mean the noise and cheering is probably the highest around the entire circuit. Fans line the grandstands and fences with flags for British heroes Jenson Button and Lewis Hamilton, which makes for a great sight.

Years ago, we’d have said it’s not the best corner for racing action. But the fact you get a great view of the Wellington straight and Brooklands corner, coupled with the brilliant atmosphere means there is real reason to consider Luffield as option for your tickets. For budding F1 photographers, Luffield is a no brainer as it is your best chance to get some great photos due to the low speeds the cars are cornering at.

Nicola Waite: Love to see the cars come from the fast Wellington straight to slow right down around the curve at Luffield. A corner that the drivers need to hit spot on or risk going too wide going into Woodcote. Got a nice photo of Alonso not getting it right and heading into the kitty litter.

By: James Wilson Part Of: The best places to watch F1 at Silverstone 3 Comments