“My interest in Formula 1 started in the mid-90s, during the Hill vs. Schumacher days. Since then, I have hardly missed watching a race, and have been lucky to so far attend 15 races (and counting!). My F1 knowledge extends to being able to name every champion chronologically, which impresses my mates, girls (unless they are F1 fans!) less so.

The 2014 British GP, my 11th overall, was my 10th in a row with the group I now attend every year with. What started as my friend and his dad attending in 1995, now has 8-10 of us attending each year. After finding Cattle End campsite in 2006, on the outskirts of Silverstone village, the site has become our home every race weekend since. Whilst numbers were down this year, the site still has a community atmosphere, created by enthusiastic regulars and owner Richard. One of the main highlights here is the charity auction, where everything from signed F1 merchandise to sour lemons are auctioned off over a few beers in aid of the local hospital.

Friday was spent walking a lap of the track, which normally would see me snapping some action shots with my SLR camera, however due to a broken hand sustained in a cycling accident I put this to rest for a year. Instead, whilst topping that Northamptonshire tan in the sunshine, we concluded that the sound of the V6 turbos ‘wasn’t too bad after all’, unlike some fellow campers who went home in protest!

Once ‘normal Silverstone weather’ resumed for Saturday qualifying, we afterwards became pundits over a pint at the White Horse with our own views on why Lewis had backed off in Q3. Having less exposure to media at live races rather than watching on TV brings out this spirit among us. My view? I would have backed off given how wet the first sector was! 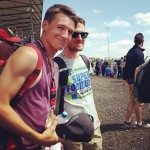 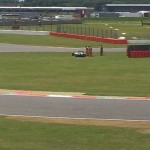 On Sunday, we took our front row seats at Becketts (over 10 years we have toured most of the grandstands, particularly those covered!) and hoped for that first British win here since 2008. After the carnage of lap 1, which helped generate an extra hour’s worth of Burger sales, we then watched as Lewis chased down Nico. Then on lap 29, Nico came to a stop directly in front of us. Every lap after saw a round of applause as a certain Mercedes passed.

Then on lap 29, Nico came to a stop directly in front of us. Every lap after saw a round of applause as a certain Mercedes passed.

After six years since I last saw a British winner, this time in dry weather, I was understandably happy. Although it would have been great to see Lewis and Nico battle it out, it was great to see the championship gap closed. Roll on Abu Dhabi, where I will be in attendance, where I hope to see 2014 conclude in a thrilling manner.”

Big Thanks to Tom Knight for the review.