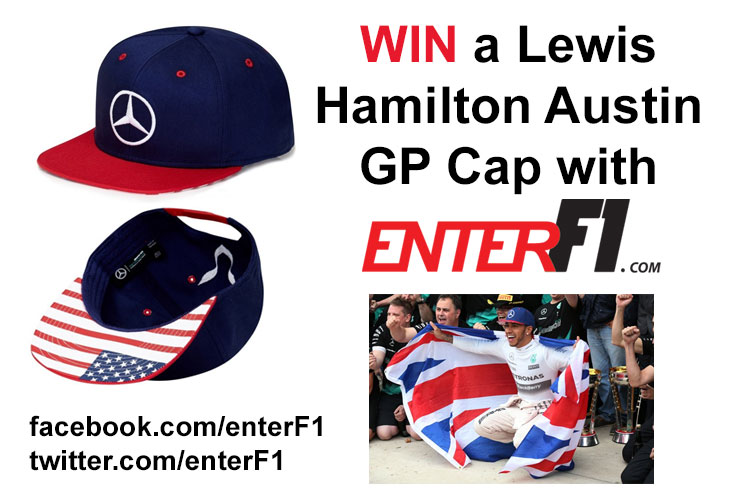 Today we are celebrating Lewis Hamilton’s third World Championship which he took in style, at last weekends United States Grand Prix. You may have noticed Lewis was wearing a special edition blue and red Mercedes AMG cap for most of the event. Well… we thought we’d give one away!

These caps are very sought after! Featuring the American flag stars and stripes on the underside of the peak, this cap is the perfect memento from his championship winning weekend at the Circuit of the Americas!

To be in with a chance of winning this awesome cap, simply leave a comment below with your highlight of the 2015 F1 season. We’ll pick the best comment / best moment and email the address that you used.

So what moment was it for you? Lewis’s British Grand Prix victory? His fightback in Hungary? His move on Rosberg at Japan? Or something else? Get commenting below to be in with a shot of his Austin GP baseball cap!

We’ll announce the winner after FP1 of the Mexican Grand Prix on Friday 30th October 2015. You’ll find the winners name on this page, as well as on our twitter and facebook feeds. Good luck!

And the winner is… Lili Varga!

Congratulations to Lili who left a great comment about Lewis at the Hungarian Grand Prix. This was a tough weekend for all the drivers in the wake of Jules Bianchi’s death. Reading about Lili meeting Hamilton, it sounded like a very special moment. You are a worthy winner of this great cap!

Thank you to everyone that entered. There were many comments that came close so please try again next time! We list every F1 competition going on our dedicated page.

GPToday, Lewis Hamilton, United States Grand Prix
← Did Hamilton go “one step too far” with his move on Rosberg?
Who’s leading the inter-team battles at the end of 2015? →