Take a walk around Spa-Francorchamps (Videos) 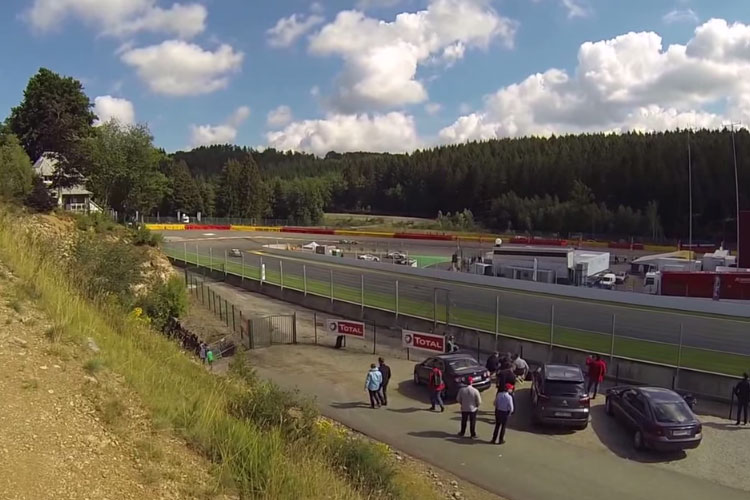 Explore one of the greatest F1 circuits

The 2015 Formula 1 summer break is nearly over and we are just a few days away from the Belgian Grand Prix at the legendary Spa-Francorchamps circuit. If you are heading there this weekend or for any other event in the future, it’s one of the best circuits to explore and walk around with numerous vantage points to enjoy.

At the end of July, we attended the 24 Hours of Spa which is the headline event on the Blancpain GT Series calendar. Audi’s, Ferrari’s, BMW’s, Porsche and Bentley’s (to name a few) went head to head for an epic 24 hour duel around one of motorsports most favoured circuits.

With a huge support bill, and a solid days worth of GT racing to feast on, we obviously had loads of time to see the action from every nook and cranny Spa has to offer. Armed with our trusty GoPro camera, we’ve taken some videos from some of the best places to watch racing action at Spa-Francorchamps. Check out our videos below and let us know in the comments where are your best places to stand/sit at the Belgian Grand Prix.

Eau Rouge gets all the headlines at Spa-Francorchamps for being so steep, but it’s actually Radillon which proceeds it that is actually faster and has more thrills and spills. With not a lot of run off if a driver loses the car, this is great spot to sit and appreciate just how fast GT and single seater racing cars really can go.

2. Half way up Eau Rouge

It had to be near the top of the list! What an amazing view you can get from half way up the mighty Eau Rouge corner. Watching the cars attack the curb on the left hand side of the circuit and then launch right up the hill is incredible.

Walking on the outside of the circuit, take some time to enjoy the speed that the cars carry from Stavelot corner all the way to Blanchimont. You’re away from the pits, paddock and all facilities at this point and deep in the forest. It feels very fast and very raw!

This general admission area is one of my favourites in the world of motorsport! It is so high and so steep which makes for a great view of the corner below. Pouhon is a double left hander after a drop down hill so the cars carry a lot of speed into these corners. You’ll more than likely find a beer and burger van at the bottom of the slope too so it;s a good place to station yourself for a while.

We also spent some time here during the night part of the 24 Hours of Spa, drunkenly enjoying the epic firework display they put on…

If you can get in the covered grandstands on the old pit straight (the run down to Eau Rouge) then take some time in there to enjoy some high speed drive-bys and awesome sounds. The engine notes echo beautifully between the grandstand you are in (which we called ‘the cattle shed’) and the old pit buildings right in front of you. These Lambo’s sounded pretty good on their soggy first lap didn’t they?

Out the very back of the circuit you can get pretty close to the cars on the entry and exit of the right-left Fagnes chicane. We managed to catch the second Audi safety car pulling in after a caution period and refuelling as the pack of cars went back to green flag conditions. Below is the entry, and then the exit of the chicane.

You have to check out the first corner at Spa – the La Source hairpin. Some drivers will wreck their whole lap by braking just a few meters too late for this tight corner. If they get it right though, they get a great sling shot down the next straight and into Eau Rouge.

Scene of the most epic F1 overtake ever (Hakkinen-Schumacher-Zonta), the Kemmel Straight is a long, high speed straight you should check out. The cars are at full bananas at this point and they’ll often be overtaking a long here too.

Martin Brundle often refers to this turn as “The Corner With No Name” after numerous track maps fail to reveal any official title. Regardless, the general admission area is incredibly high above the corner making for an epic view as the cars drop down hill and power towards Pouhon. I only filmed this corner at night but you get the idea!

There you have it – 9 spots around Spa-Francorchamps that you HAVE to try out for yourself on your next trip to the circuit. My best advice is to take a backpack with plenty of drinks and snacks, wet weather clothes for when the weather turns and be wearing some some comfortable and grippy shoes. You’ll thank me for it later!

If you haven’t got a clue where some of the viewing spots above are on the circuit, check the circuit map below, courtesy of the Spa-Francorchamps Wikipedia page: 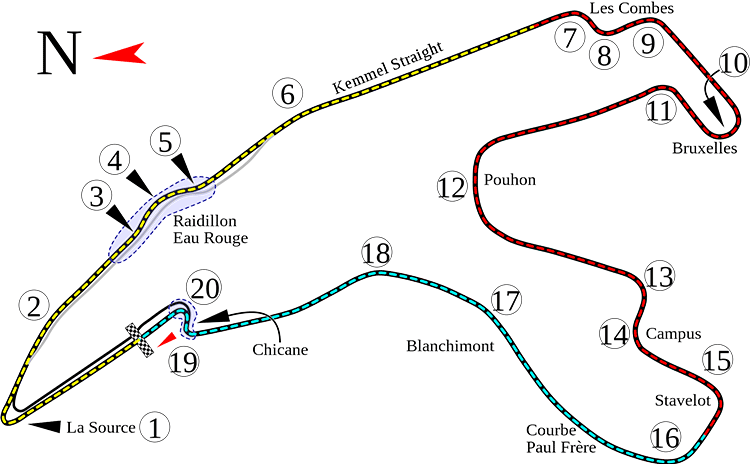