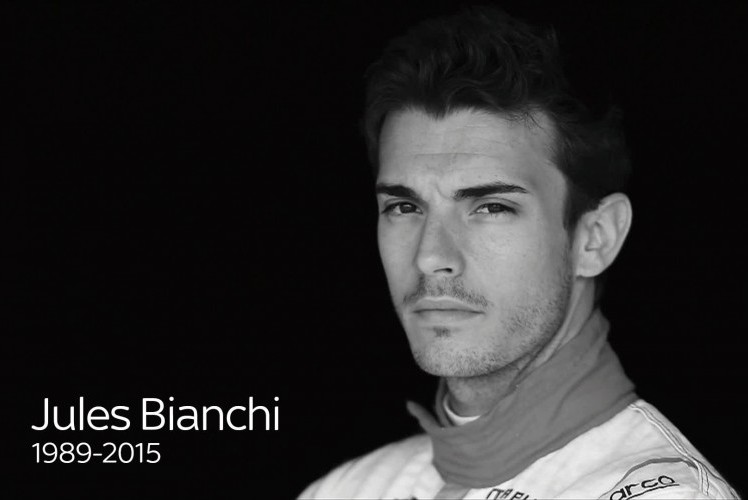 EnterF1.com reflects on the death of Jules Bianchi

It’s been 4 days since I learned of the passing of 25 year old Formula 1 driver, Jules Bianchi. In that time, I’ve managed to digest it, accept it (to a degree), and it now feels like the right time to share my thoughts on everything that has happened.

It’s been over 9 months since he crashed so tragically at the Japanese Grand Prix in Suzuka. I was told that Jules had died on Saturday morning as soon as I woke up, probably similar to many millions of people around the world. When I found out he had died, I didn’t feel a sense of utter shock, nor surprise. The overwhelming feeling was all hope evaporating into thin air, in the blink of an eye.

Each day, week and month that has passed since Jules crashed, the feeling of hope was on the decline, bit by bit. But it was never gone completely. So long as an injured human being is breathing and therefore fighting for their life, there can be no alternative than to cling on to hope, no matter how slim the chances of a miracle may be.

For Jules there was to be no miracle. His fight is now over, he is at peace and his family and close friends will now move into a brand new phase of their lives. They have spent the last 9 months holding on to the thinnest strand of hope at his bed side, and seeing almost no progress. This will now be replaced with trying to manage to accept he has gone and that their lives must continue – albeit in whole new form.

Motorsport in general, but Formula 1 in particular, never stands still. Safety and procedures have been vastly improved in the wake of events of the Japanese Grand Prix. Although no one could state that with 100% certainty that a similar incident won’t happen again, the changes that have been made in the sport certainly go a long way to reducing the probability.

And so to Jules…

No death or serious injury in F1 would be easy to accept, but what in particular have we lost with the passing of Jules Bianchi? A lot – is the answer. Young, talented, proven, loyal, tenacious, kind hearted, good looking, ballsy and a true fighter – I challenge you to disagree with any of those well earned descriptions of not only Jules the racing driver, but also Jules the human being.

Not just a driver making up 5% of the grid week in week out, Jules was set for a full Ferrari works drive to try and fulfil his dream of becoming a Formula 1 World Champion in the future. His career was going incredibly well and there’s every bit of evidence that he’d have made it to the top. Breaking into the second part of qualifying twice, despite being in the slowest car, and finishing 9th at the 2014 Monaco Grand Prix, thus achieving the only points ever scored (to date) for the Marussia F1 Team was nothing short of against all the odds.

It’s interesting that just days before Bianchi’s death, his father Philippe was incredibly revealing in a conversation he and his son had had about Michael Schumacher’s condition, following the German’s serious head injury in 2013. Philippe said:

“He told us that if he had an accident and was left like Michael Schumacher, the additional handicap of not being able to race would have been difficult to keep on living with. It was his life.”

It was an issue that he had obviously thought long and hard about. Fortunately or unfortunately, Jules and his family will never have to deal with that scenario, and I believe we should take some comfort from that.

In the same way as Senna, Ratzenberger and many others before, Jules Bianchi spent the last moments of his life, racing hard, on the limit, with the bit well and truly between his teeth. It’s a sobering thought that he died pursuing his dream.

Onboard with Jules Bianchi in Monaco 2014