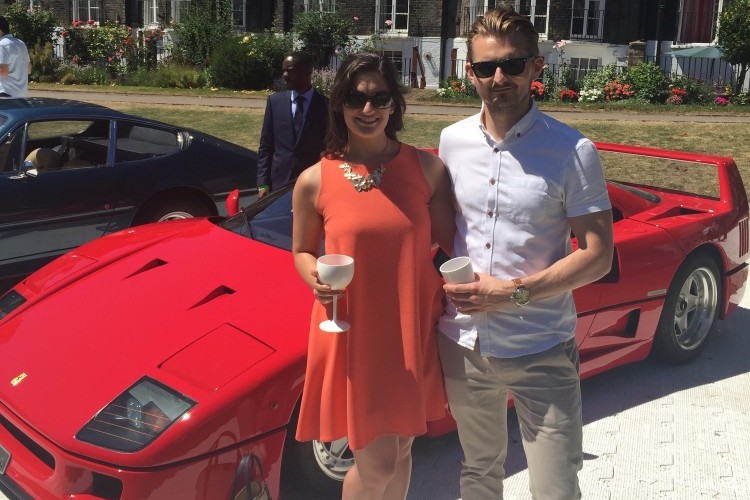 I wouldn’t blame you if you thought that the British Grand Prix is just a 3 day event, held on a weekend in July. Although that is factually correct in terms of the on track action at Silverstone, the truth is the build up starts much, much earlier, in England’s capital…

The team at GP Management have successfully organised their London based build up event in the shape of Race Week. Held at the Honourable Artillery Company in the city of London (nope, I hadn’t heard of it either – but it’s a short walk from Liverpool Street station), it’s the perfect location for city folk to let of some steam in a beautiful garden setting.

The idea is simple. A renaissance of the 1974 cricket match organised by James Hunt and Niki Lauda, a host of priceless F1 and other top level motorsport machines lined up ready to be drooled over, car demo’s and a stunt team.

Making an appearance at the 2015 Race Week event were McLaren-Honda and partner Esso with some pretty impressive equipment on show. I’m of course referring to the supreme McLaren 650S road car. I’m not sure I could describe the current McLaren-Honda F1 car, also on show, as “supreme”, but there was one there for fans to get up close to!

Esso have launched a campaign called #FuelYourSenses which is about bringing a brand new perspective of Formula 1 to the heart of the fans… or perhaps to the “eyes” of the fans. The team gave us an exclusive look at their new 360 degree, virtual reality (VR) simulator experience, placing us almost into the helmet of Jenson Button on a hot lap of the Silverstone National circuit.

With the virtual reality headset in place over my eyes, and sat behind the wheel of a McLaren-Honda F1 car, I was instantly immersed into the real cockpit of Jenson Button as he attempts to overhaul a Honda Civic and McLaren 650S, which of course have both been giving the obligatory head start.

Although you don’t get to control the car, you can look around with a full 360 degree view of your surroundings as you blast around Silverstone trying to catch the two cars further down the track. Let me tell you, it’s very clever and definitely a new experience for me. It’s how I imagine Formula 1 computer games to look and feel in the future – the technology just isn’t quite there to allow you to actually control what you see. I really liked what Esso have done and will certainly be keeping an eye on their website and YouTube channel to see what other treats are in the pipe line.

The cricket match in full flow…

What feels like a garden party wouldn’t have been complete without a thriving bar. As the cricket match wore on in the summer heat, the drinks also kept flowing late into the afternoon.

Last on our agenda was checking out one of the stunt shows being performed by the Xtreme Stunt Team. Check out the video below – super impressive and heart stopping tricks!

Race Week serves as the perfect warm up gathering of motorsport personalities and fans alike. If they can get a few more current F1 drivers there (Will Stevens was there in 2015), no doubt more fans will pile in for more festivities next year.

We’ll be back, that’s for sure!