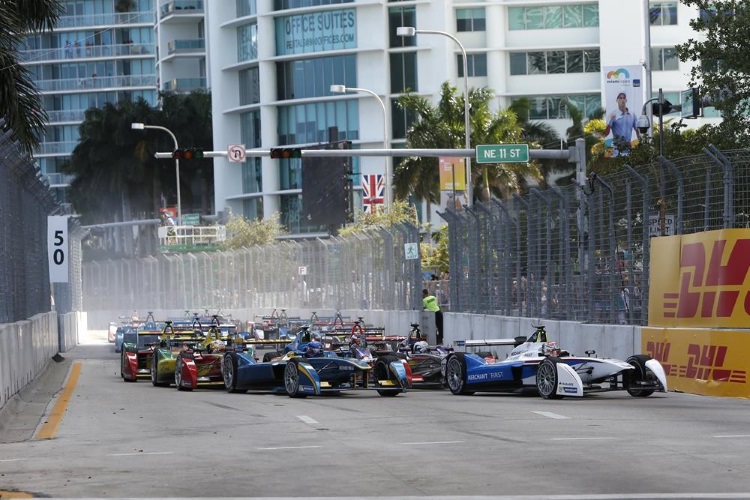 We‘re half way through the inaugural Formula E Championship and things seem to be going well for the new series. There was some concerns over cash flow, but that’s improved with the recent involvement of US media mogul John Malone and his companies Liberty Global (Virgin Media Owners) and Discovery Communications which controls Eurosort.

With just 18 points separating the top 4 drivers it’s all to play for as the teams head to Long Beach in USA for round 6 on 4th April.

The Formula E spectacular has had mixed reviews from the Motorsport press but continue to prove popular with fans due to its low ticket prices and in some cases FREE entry. The next round is a FREE entry event at the Urban Waterfront Playground 20 miles from downtown Los Angelas. The race is being held on a 1.6 mile street circuit along a stretch of the 11 mile sandy beach front.

Renault are doing a little better in the Formula E series compared to F1 and are currently leading the series by 31 points from the Audi Sport ABT team. In third 1 point behind are the Virgin Racing team with drivers Jaime Alguersuari and Sam Bird, who is currently third in the Championship.

There are a number of former F1 drivers taking part the new series. Undoubtedly this has helped raise the profile and out reach of the series. Jean-Eric Vergne is probably the best known F1 driver. Vergne moved to Formula E after his contract with the Toro Rosso F1 team ended at the end of 2014 season. He has managed to secure two pole positions from 3 races, but has proved less successful during the races. Sébastien Buemi is the best of the former F1 drivers in 5 place in the Championship. Nicolas Prost the son 4 times Formula 1 champion Alain Prost currently leads the Championship by 7 points.

After Long Beach, Formula E moves to Europe with races at Monte Carlo, Berlin, Moscow with the final race being held in London on 27th June. The London event will be held at Battersea Park and will include 2 rounds increasing the inaugural calendar by one additional race to 11.

If you’re in the UK you can watch Formula E on ITV and BT Sport.