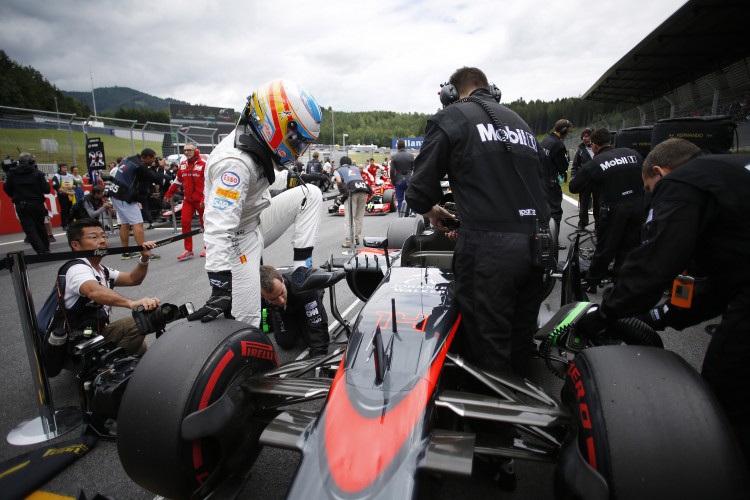 After two, not so “classic” races recently, and some political storms rumbling away behind the scenes, there’s some big talking points in Formula 1 right now. Who better to talk it over with than BBC F1’s Allan McNish. We talked about the racing or lack of racing at the front of the grid, Red Bull and McLaren Honda at the back of the grid and what Nico Hulkenberg’s sky high stock could mean for this future…

JW: Although the championship battle is pretty hot right now, the feeling with some fans is that racing at the front is quite dull. Is the difference in speed between all the teams just because we’re at that stage in the cycle after a major rules change, or is there more to it?

Allan McNish: I think it’s partly because of the major rule change that Mercedes had made a bigger step forward than anyone else, and we saw it last year that on certain tracks; Canada and Austria especially, where all the Mercedes engine teams were at the front. Mercedes themselves I think made a bigger step forward over the winter than probably most people realised and I think that gap kind of extended. I think as well in those last two races, Ferrari underperformed a little bit to be honest with you. Vettel had the penalty in Canada, having to start from the back after the technical issue they had from qualifying. In Austria, Kimi started from the back, had the shunt and in reality they didn’t translate their Friday pace in to Sunday pace, which was why I said I think they underperformed a little bit. So I can sympathise very much with how the fans are feeling about all this and I’m a fan as well at the end of the day as well and you want to see some good hard racing, and the last two races certainly haven’t done that.

But I think looking forward to Silverstone, the nature of the circuit with it being quite down force lead, will bring back into the equation – I would have said – Red Bull, for example they should have been a little bit stronger, but they’ve been totally out of the park in the last couple. I think Lotus, actually, will continue to be somewhere there or thereabouts. Force India maybe drops off a little bit, Williams’ aero spec is a doubt because they went for more down force that’s what their aerodynamic updates is purely to get more load onto the tyre and that will see it benefit. Now, are they going to be overtaking Mercedes, at the front? I’m not so sure – but hopefully they will be a wee bit closer.

It wasn’t the most exciting race in Austria to be honest with you at the front – really it was left to Pastor Maldonado to have a few good tussles and Max Verstappen to get his elbows out on few occasions, to bring it a wee bit alive. Valtteri as well coming back from maybe not qualifying as highly as he should have done. Nico Hulkenberg did a superb job after that bad first lap in his overtakes. Everybody had their pace with it being a definite 1 stop strategy, as it was in Canada, then it didn’t really offer up any options for somebody to do something different, so everybody’s doing the same thing with roughly the same sort of speed differentials between each-other then it’s never going to actually create a lot of overtaking which is what mostly the fans are looking for at the moment.

JW: Yeah it would be good to see BOTH Ferrari’s in the mix at the front that’s for sure.

Allan McNish: They’ve been there, and Kimi’s been a lot more competitive than he was last year because last year it was as if he wasn’t at the races half the time, and he’s got a much more of a feel for the car. And it’s been there or thereabouts. And it’s not been with the consistent speed that is needed and especially when it’s needed is to try to make that difference to separate the two Mercedes. And that’s what Ferrari have to do: firstly, get both cars right up at the front and they haven’t been able to achieve that in the last couple of grand prix. And the second thing it they’ve got to try and split the Mercs, because if you split the Mercs then you’ve got a chance, if you don’t split the Mercs then you’ve got to do something to overtake them and that’s gonna be tough in terms of pure on track, and if it’s a one stop strategy then that’s bloody tough in the pits because you’ve only got one.

JW: Seeing Red Bull and McLaren line up at the back of the grid reminded me of the plight of Ferrari and McLaren back in 2009 after those major rule changes. How do you see the patience of both teams playing out the rest of the year.

Allan McNish: I took a picture and tweeted it out (see below). You had McLaren, you had Red Bull, you had Ferrari and they’re sitting with Marussia – it just wasn’t what you expected at all! I think there are different scenarios, the Red Bull scenario with Renault clearly is very fractious and it was highlighted with Dietrich Mateschitz making a statement in Austria at his home circuit, a circuit he owns, so he’s very entitled to say exactly what he thinks, and ultimately he is the paymaster for it so you know, he can do what he wants and if he doesn’t want to play he doesn’t have to play. He’s invested a lot of time and a lot of money over a lot of years, into the sport, not just into Formula 1 but into the sport and I think the sport is richer because of it and I don’t mean richer financially, I mean it’s got a someone to save the World Rally Championship because without it I think it would’ve been very difficult for that to continue forward. He’s bought what was the Minardi team, a backmarker team up to being somewhere for young drivers to make their name, so I think – just to give a quick summary – that he’s been a very positive thing for the sport, however it has got its double-edged sword which is clearly that right now where they’ve been used to winning that they don’t want to be not winning.

And they make it very clear where they feel the performance deficit is now, personally I don’t think the Red Bull chassis is even the chassis of choice right now, you know you could say there was probably one or definitely two cars that look to be better on track than Red Bull. And on the other side of it there’s no question that Renault need to step up. So I think both parties are probably not at their very best. But Renault will at some point have to make the decision as to what to do and I think that will determine the future of Red Bull and Renault as opposed to anything else.

I think in regards to McLaren and Honda – well it’s the worst season they’ve ever had in history! Something major, major has to change there. Because they’re talking positively about some aero upgrades, they’re talking positively about only being 2.5 seconds off the pace. You know, that’s huge, 2.5 seconds, you’re talking about a team that’s history and tradition is based on innovation and winning. And that’s unacceptable. Some major changes have to be made, to make sure that can be resolved if that can be resolved, you know I’m not that sure.

Something big has to change there, because it’s not good enough, I think it will be very difficult to be resolved in 2016 let alone 2015.

An illustrious backs of the grid with #McLaren, #Ferrari, #RedBull on last 4 rows…Race start in 15 mins @bbcf1 pic.twitter.com/tWcuvPRhH2

Allan McNish: In a Formula where regulations are restricted and regulations dictate what you can and cannot do in a season and where they are with their liability and performance then I think it’s a long way to go.

JW: Where do you see the future for Nico Hulkenberg after his Le Mans success? Should he keep persisting with F1, in the hope of a top drive becoming available?

Allan McNish: I forget Le Mans at the moment, his result and his performance at the weekend, tells me “yes”. I think what Le Mans has done is, it has shone a spot light back on his head and Nico when I watched him the first time, when he came I think it was the A1 grand prix which most of your readers would probably not know much about now, but he basically, has had a very strong career in everything he’s raced in, he’s adaptable, he nearly won in Brazil a couple of years ago in the Force India and he had an incident with Lewis Hamilton for the lead at the time. And that type of performance is the sort of thing that reminds people what a driver can do and winning Le Mans definitely did two things for me, or for him I should say, in my opinion; one of them was it put the spotlight on his head, and reminded people that “Christ this guy can drive”, and the second thing is it took some of the pressure off him. Because naturally we as humans always look to the next thing. And the next thing was Nico Hulkenberg and then it suddenly became Max Verstappen and Carlos Sainz to some extent and we forgot about Nico Hulkenberg basically as if he’d passed his time. But this is a reminder that he’s only 27 he’s got a wealth of experience he’s got race class and the boy can get the job done, so if you are Ferrari and you are looking for a replacement then to me there’s a lot of logic in taking someone that’s got a stable character that’s got the experience that’s got the speed and has also got another 6 or 7 years left in him.

Thanks to Allan for his time mulling over the latest talking points in F1. Check out our second interview with him next week as we look ahead to the British Grand Prix at Silverstone!